When Sunraysia musicians organised a step-back-in-time gig in Mildura last year they decided to donate profits from the event to the recently established Mildura Community Water Bank. “Once upon a time in Mildura” was a three band reunion held at the Mildura Club over two nights in March, both nights were sold out.

Chris Rogers, one of the organisers and a well known Mildura-based musician, said “I’m really happy to support this initiative that is all about keeping it local. During the 2019-20 summer I witnessed first hand the impact of lack of water for our small-scale farms when the neighbouring paddock’s top soil basically blew away. It’s really exciting to see an organisation in our region that’s committed to supporting regenerative farming practices for our region and supporting growing food for our community.”

Members of the three bands that reunited for the concert wanted to see profits going somewhere good. Band member Greg Evans said, “donating the profits to a charity was one of the motivations for the concert, we wanted to send the benefit onwards. There are always the usual charities but we wanted to support something a little left-field. It’s always good to see something else come out of all the time and effort we put into rehearsing, besides having a great time together.”

“Once Upon a Time in Mildura was supported by the Mildura Club and their committee, and without their support we could not have had such a successful event,” Mr Rogers said. “It shows what’s possible when people come together to do something that’s fun and good for the community, and we’re just happy to see it flow on to benefit our local farmers through the Community Water Bank.”

The Mildura Community Water Bank was established in 2020 with support from the Department of Environment, Land, Water and Planning and Food Next Door Co-op. The Water Bank’s aim is to collect donations of money and water and use them to maintain and activate regenerative farming practices for direct producer to consumer consumption.

During the 2020-21 water year 11.6 ML of water was generously donated by local irrigators and utilised by new migrant farmers on Food Next Door Co-op’s farms. Mildura-based Food Next Door is a charity that works to build community and sustainable local economies through food. As a partner of the Mildura Community Water Bank, Food Next Door assists in managing water donations on a day-to-day basis.

Food Next Door’s Community Support Project Officer Jules Kangeta said “When Chris approached us to ask if they could donate the profits from their event we were very happy. We are very grateful to everyone who has supported this project.” Jules, a former refugee from the Democratic Republic of Congo, worked on establishing the Mildura Community Water Bank and helps the new migrant farming community understand water issues through regular education. “This project is very important for the local community, helping the small-scale farmers to get access to affordable irrigation water for their farms to produce local fresh crops, to produce vegetables at a reasonable price that is affordable by everyone,” Jules said. 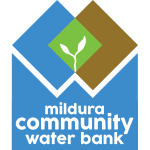 We thank and acknowledge the First Peoples on whose land we walk and work,
for looking after our land and waters for millennia.
We acknowledge First Nations people around the world as wisdom-holders
for our future and the future of our planet.